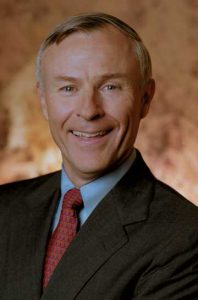 John A. Warden III is an executive, strategist, planner, author, and motivational speaker whose work has had a worldwide impact in business, in the military, in government, and in education. Vietnam combat pilot, author whose books include The Air Campaign and Winning in FastTime, Air Force Fighter Wing Commander, credited by Norman Schwarzkopf and Colin Powell as the architect of the Desert Storm Air Campaign, Special Assistant to the Vice President of the United States, Commandant of the Air Force’s Command and Staff College, successful business founder – he has capitalized on his studies and experience to create the Prometheus Process, a unique approach to strategy and success applicable wherever competition exists.

He has written numerous articles on the future, new strategy (business and military), aerospace power, acquisition reform, and campaign planning. The Desert Storm Air Campaign was based on his revolutionary concept of “the enemy as system” in which military forces are considered parts of a much larger whole. He wrote the seminal work on modern airpower theory, The Air Campaign: Planning For Combat, which has been translated into at least seven languages.

He has appeared on FOX, CBS, CNN, MSNBC, PBS, the Discovery Channel, the History Channel, the National Geographic Channel, the BBC, NPR, numerous radio talk shows around the country and is frequently featured or cited in newspapers and magazines with global circulation such as Forbes, Time, the Economist, USA Today, and Newsweek.

“The Air Force staff quickly came up with an air campaign, the brainchild of Colonel John Warden, a brilliant, brash fighter pilot and a leading Air Force intellectual on the use of airpower…Warden’s original plan would undergo numerous modifications…but his original concept remained the heart of the Desert Storm air war.”

“Less than a week had passed since I’d called the Pentagon for help, yet Warden and his team had put together a remarkably good plan…Warden had come up with a strategy designed to cripple Iraq’s military without laying waste to a country.”

“Less than a week after the invasion of Kuwait, Schwarzkopf had asked the Joint Chiefs for help in designing a counterstrike in the event of war. The job fell to Colonel Warden…His first blueprint bore a striking resemblance to the war plan executed in January.”

“In the mid to late 1980’s, two powerful books by distinguished officers appeared that had profound impact on the American defense establishment. These were John A. Warden’s book, The Air Campaign: Planning for Combat…It catapulted Warden into the first rank of modern air power theorists.”

“John Warden has taken the inherently complex and distilled it to an actionable essence. His insights on leadership and strategy make clear the fundamentals for winning in business. John understands the leader’s challenge of creating and executing winning competitive strategies in a time-sensitive environment.”

“At a time when pseudo-gurus are saying strategy is a dead idea, John Warden and Leland Russell offer a clear, compelling case for the power of a winning strategy. As the architect of the Gulf Air War, Warden ought to know!”

“I had the privilege of being part of John Warden’s core team that planned and communicated how to organize the Gulf War for victory quickly. This book shows how the best of modern military strategic thinking that was used with such great success in the Gulf War can be applied directly to business and elsewhere – and why it is essential to do this. This book provides an excellent way for people in non-military settings, where there is a great deal of competition and interactivity, to learn from recent military experience and thought. It is thought provoking and is filled with brilliant insights.”