Does the Prometheus process work?

“I’ve read a lot of books on strategy and execution and there’s some great systems out there and I’ve used a lot of them. But when it comes to simplicity clarity and particularly workability there’s nothing to compare with the Prometheus process for an emerging company. And it’s produced phenomenal results for us.
The system produced for us focus. Everybody got energized because everybody knew where we were heading because of the future picture. We had a clear credible vision a picture of where we wanted to go, and we’d develop it through John’s system of open planning where everybody was engaged. Everybody was involved.
It’s probably the most effective systems we’ve ever implemented in our history. It was a seamless process. It did exactly what I’d hoped it would do. It increased the rate of our growth by a factor of two and it doubled our bottom line.
This is probably the best investment we ever made. John fee is quite modest. There was time the executive time to implement it but because it brought everybody together in alignment it didn’t waste time in fact it’s save time. It could consume time, but it saved a lot of time and the results were so incredible. So the return on investment is simply extraordinary.
If you want smooth execution of what you developed the process gave us a management tool a workable practical tool and when we saw the results it became self-perpetuating people wanted to use it. We didn’t have to demand that they use it and it was simple practical people used it. They saw the results and as you’ve seen the graphs those results are pretty incredible.” 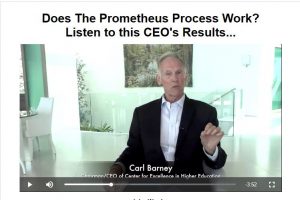