VANCOUVER — With the smell of burned kerosene fresh in the air, Discovery Air Inc., a small bank-run aviation investment firm, announced yesterday what can only be described as a high-flying, high-octane deal to buy Top Aces, an upstart Canadian private fighter-jet company.

To announce the radical addition to its fleet, Discovery brought its shareholders to the Yellowknife airport and watched as Top Aces co-founder Didier Toussaint, a former top-gun air force pilot, scorched the air low over the sub-Arctic landscape and then taxied in to present the signed purchase agreement.

“When you have jets you might as well use them, right?” said David Taylor, Discovery president and chief executive.

Discovery was founded by Pacific and Western Bank of Canada, a London-Ont.-based lender that recently took the unusual step of shopping for aircraft.

Discovery’s strategy is to acquire profitable niche aviation companies such as Air Tindi and Great Slave Helicopters, both Yellowknife-based firms it bought last year, in hopes of saving money by buying in bulk for insurance and fuel.

Buying Top Aces will add not only many thousand pounds of thrust to its fleet, but sufficient financial backing to give it   a shot at aerial combat with the world’s best fighter pilots.

“Top Aces could very well provide expanded services to the Canadian government and perhaps to other NATO-country governments if they had better access to capital,” said Mr. Taylor, whose bank has since dropped its share in     Discovery to 10%. “And we sure hope to provide them with that.”

Mr. Taylor would not disclose Top Ace’s earnings, saying only “they met our criteria for a very profitable company.”

The deal, which remains subject to financing and regulatory approval, makes Top Aces a subsidiary of Discovery Air — without changing its staff or management — for a purchase price of $35-million in cash and Discovery shares worth $30-million at yesterday’s prices.

The deal, which has yet to be signed by 30% of Top Aces shareholders, is expected to close in August.

Founded by Mr. Toussaint and two other retired air force pilots, the Pointe Claire, Que.-based firm hires out its fighter jets to the Canadian military for training.

Flown by some of the most accomplished pilots to leave the Canadian Forces, the Alpha jets are used, for example, to act as enemy aircraft in practice skirmishes with CF-18 pilots or naval electronic warfare operators.

With a starting fleet of eight Alpha jets, Top Aces has quickly expanded since it first signed a three-year, $94-million contract with the Department of National Defence in 2005.

It now owns two more Alpha jets and last year won an additional contract that allowed it to buy four Westwind business jets used for tasks the fighter jets can’t do, like towing airborne targets for the navy.

Its ambitions, though, are global, with plans to buy another five to eight Alpha jets and market the service — and the company’s stock of high-calibre pilots — to the United States or the U.K. and other countries.

“As far as doing what we do we’re definitely one of the largest in the world and ? what that gives us is the opportunity   to grow into really a significant presence in this market worldwide,” Mr. Toussaint said.

But York University defence analyst Martin Shadwick warned that could be   difficult.

Other players, such as U.K.-based FR Aviation Services, have already offered some similar services in major markets such as England and France for years now.

“Yes, there is a market,” he said. “But even Bombardier [Inc.], which is in military flying training and so on, has come up against some pretty big competition in global competitions.”

Top Aces, which is busiest in winter, should help Discovery maintain more consistent quarterly earnings and speed its transition into new areas of business, he said. 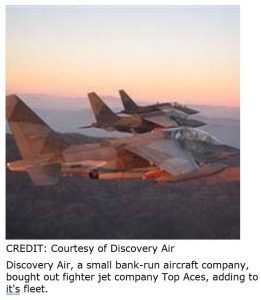